DEVELOPING A CULTURE OF SAFETY 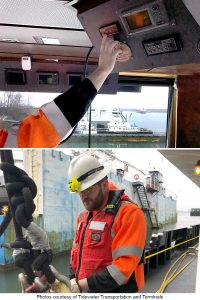 Even before the implementation of Subchapter M requirements, Vancouver, Washington-based Tidewater Transportation & Terminals had developed a strong culture of workplace safety. Within its overall plan is using and regularly testing Emerald Marine Products’ ALERT Man-Overboard System.
The ALERT system consists of a water-activated transmitter worn on a lifejacket and a receiver installed in a wheelhouse. If the wearer falls into the water, it instantly activates a piercing alarm and flashing light, alerting the boat captain to the man overboard (MOB). It can also be wired to set a chartplotter or GPS waypoint, kill engines, and trigger external strobes and speakers. A video is at bit.ly/2IfegAj.
“We chose the ALERT System because it’s simple and easy to test,” said Bill Collins, director of environmental, health, safety and security, Tidewater Transportation and Terminals. “It fits on a PFD without being bulky and is effective.” The device is standard equipment for all vessel crew members and unescorted visitors while aboard.
Before casting off, every piece of safety equipment aboard a Tidewater vessel is tested, including the ALERT System. The company implemented a Pre-Voyage Checklist and Compulsory Test/Inspections Form that boat captains follow. This ensures nothing is overlooked.
This attention to detail is why Tidewater has such a notable safety record. “We have high expectations,” continued Collins. “Our goal is ‘target zero’—no injuries or spills.” The company has a robust 6-month training phase for new employees, including fire and MOB drills, that instills the importance of safety.
Once the employee becomes an unsupervised deck mechanic and is assigned to a crew, the hands-on training has become second nature. Tidewater uses a behavioral-based safety program that uses observations of safe and at-risk conduct, and relies on peer-to-peer feedback. Vessel groups have a target number of observations to conduct. It’s a proactive leading indicator system that augments the company’s traditional safety programs.
For 85 years, Tidewater Transportation & Terminals has provided marine transportation, terminal and railcar storage services to the Pacific Northwest. Dedicated to the well-being of its employees, the cargo it carries and the environment, its operations span 465 miles of the Columbia and Snake Rivers. Its website is www.tidewater.com.