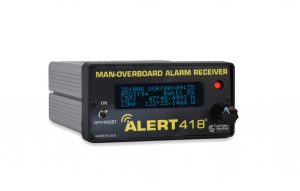 When an ALERT transmitter is submerged, the ALERT418 receiver instantly flashes and sounds a piercing alarm in a wheelhouse or shoreside office. It displays the transmitter’s unique ID number and signal strength, critical data when lone workers are involved, as well as battery strength. The device also shows the location of the vessel at the time of incident.
The ALERT418 Man-Overboard Receiver interfaces with popular NMEA 0183-compliant chartplotting software, so a waypoint can automatically be set upon transmitter activation. Additionally, it can be wired to kill engines, and activate external strobes and speakers.

What separates the ALERT system from AIS is its immediacy. It uses a radio signal, so there’s no satellite lag or waiting for an open channel. With a moving vessel, or river or tidal flow, an MOB victim can be swept out of sight quickly. The ALERT418 Man-Overboard Receiver provides the added seconds needed to keep a simple fall from becoming a fatality.

Working on a frequency of 418 MHz, the ALERT418 receiver is FCC Part 15- and Industry Canada RSS 210-approved, so licenses aren’t required. The device features a GPS connection, DB-9 serial port and dry contacts for external alarm capabilities. It includes a 15″ flexible whip antenna and 25′ of coax cable, and mounts flush or on a bracket.

Emerald Marine Products’ ALERT418® Man-Overboard Receiver is made in the USA and costs $1,899.