Cost of a Man-Overboard Alarm System

Cost of implementing a man-overboard alerting system may be a barrier to saving lives. Knowing if a man-overboard situation (MOB) has occurred on your premises is what keeps executives and safety personnel up at night. Fortunately, a solution for detecting a MOB has been around for 20 years. Sometimes referred to as MOB Beacons, Marine Survivor Locator Device, or Locator Beacons, it’s all about technology that will alert of a fall overboard. Making a decision to invest in a man-overboard beacon system should be imperative for a company with employees working on or near water. However, the cost and time to implement a MOB alerting system can seem daunting.

Emerald Marine Products has been protecting employees working on or near water for over twenty years so we have a clear understanding of the costs and time to implement a solution. We have a solution that is easy to implement and very cost-effective.

Understanding True Cost of Ownership of a Man-Overboard Alerting System

In regards to the cost of implementing a system, you want to not just look at the initial purchase price, but the total cost over the lifetime of a product for the Total Cost of Ownership (TCO). We recently had the opportunity to put our mathematical skills to work to calculate the TCO of our ALERT Man-Overboard devices. Why is this important? There are competing products in the MOB Beacon/Locator Beacon marketplace, so it’s important to consider what MOB alarm systems will last longer and understand associated maintenance costs.

If you are involved in purchasing safety technology, one of your concerns is how long with MOB alerting technology last? Emerald Marine Products is proud of the fact that our man-overboard alerting devices have been serving the maritime industry for over twenty years. It is doubtful many of today’s Man Overboard Beacon vendors will be around that long. In our twenty-year span of business, we have seen other MOB Alerting products and technology go out of business

ALERT MOB alarm products do not require any software to operate. The ALERT Man-Overboard Alarm System relies on the decades-old wireless transmission on the 418MHz frequency. No need for costly software or updates to keep the technology current. Bluetooth and AIS alerting systems may have an initial price less than our ALERT Man-Overboard Alarm System but the TCO may take on a different cost once the longevity of the system is considered.

Dependence on Other Technology to Support a MOB Alerting System

Many MOB Beacon App-based systems have a life expectancy of 2-3 years based on supporting software technology by the manufacturer or the operating system the apps need to function. Constant updating for bug fixes and security concerns are guaranteed. The ALERT Man-Overboard Alarm System requires no software updates to remain functional. So when looking at the CTO of the ALERT MOB system, you simply need to look at the initial purchase price and any costs associated with new batteries or replacing a worn pouch or outer shell.

Last month, we received 40 ALERT2 Man-Overboard Alarm System Transmitters for a service check-up. This group of 40 allowed us to see how our man-overboard transmitters have fared over a span of time. We are happy to report that other than updating some worn pouches, outer shells, and batteries, the ALERT2 Transmitters were fully functioning. This proved that units in five-plus years of heavy maritime use may require a new pouch or batteries, but nothing more.

In reviewing this sample group of 40 units, and many other servicing checks over the years, we have confirmed our products last 7plus years. Based on a lifetime of 7 years (at a minimum) at an initial cost of $274 plus one set of new batteries, the total cost for one transmitter per day for 7 years is $0.05/day. Assuming one ALERT2 Receiver will be needed to support five ALERT2 Transmitters (numbers will vary so we took an average). We calculated that the average life of a receiver is $0.44/day. As you increase the number of employees, you decrease the TCO of man-overboard alarm protection.

We have all heard of the analogy, “for the cost of a coffee at Starbucks you can…” We hate to use that analogy, but when it fits it fits. Using these sample figures previously outlined, a crew of five can be protected for $0.69 per day over a five-year period, A fleet of 10 boats and 40 crew can be protected for $6.40/day over a five-year period. If the TCO doesn’t convince your financial department, think of the money spent on a lawsuit for an injury or fatality when a life-saving product exists and wasn’t used.

Now Easier Than Ever to Implement a Fall-Overboard Alerting Solution 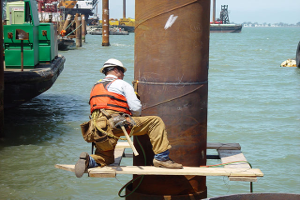 Maybe your employees aren’t on boats. Yet they work dangerously close to water. The ALERT Man-Overboard Alarm System protects employees working near the water with alerting devices for fall overboard awareness. If your a dredging, marine construction, or terminal operations, alerting employees within seconds of a fall in the water situation is crucial. Water that could sweep them out of sight or, in cold weather, send them into shock and restrict their muscles within minutes. A video describing how the ALERT System saved a deckhand from a near-fatal barge accident is at youtube video.

Used by scores of Marine Terminals across the United States, The ALERT Man-Overboard Alarm System is fast becoming the defacto standard for reliable, affordable, and expandable alerting devices to alert of a fall in the water. Sometimes the “buddy system” of keeping track of a fellow employee is physically impossible to administer. In the current operating conditions imposed by the COVID-19 crisis, employees are also tasked with more social distancing and the wearing of Personal Protection Equipment (PPE) that might hamper visual awareness of other employees near their surroundings.

The ALERT Man-Overboard Alarm System provides the technology to span over 1,000 feet of coverage. Let Emerald Marine Products guide you on what system will work best for your specific locations. Conversly, because some of the locations are remote, expanding the alerting functionality of a fall overboard situation is imperative! The ALERT Man-Overboard Alarm System has a mryiad of ways to expand alerting capabilities of alerting devices for fall overboard awareness. As a reult, our clients use external alarms, strobes, remote autodial, cell phone alerting trees, pre-broadcast to HF radios and even internet enabled alarms. Again, let Emerald Marine Products guide you through expanded alerting functionality.

Looking to Implement Fall in the Water Awareness

It’s easy to quickly implement fall in the water awareness. Here is a link of an article covering the aspects of protecting your employees working near water with awareness, training and retreival. To discuss a solution that works best for your company’s operations and budget contact Emerald Marine Products at 800-426-4201 or use our contact page.

Curious about our two ALERT Man-Overboard Alarm Systems? This new video provides information about the ALERT2 and ALERT418 systems. Their similarities and the improvements made with the new ALERT418 system.