On April 24th, The United States Coast Guard released a Safety Alert reassessing man-overboard risks in response to a fatality that occurred while a personnel exchange was taking place at sea. You can read the full Safety Alert here  In the Alert it was stated, “The ship’s Boatswain and Ordinary Seaman (OS) were manning the port side shell access port and pilot embarkation space behind a hydraulically operated bi-fold hatch door and were preparing for the pilot’s arrival. The port was located forward of the house and approximately 13-feet above the waterline. The Boatswain and OS were unable to monitor the seas from their position behind the hatch door. As the two crew members were in the process of opening the door, seas unexpectedly struck and violently forced it open, flooding the space. The OS was not wearing a harness or safety line nor a personal flotation device; he was subsequently swept out to sea. The Boatswain was forced onto the deck whereby the pilot ladder fell on him, fracturing his leg. The side shell door also sustained structural damage during the incident. Coast Guard Sector New York launched an extensive search and rescue mission that was terminated with no success after 28 hours. The OS was lost and presumed dead.”

The Safety Alert goes on to state, “This casualty reiterates the dangers of personnel exchanges at sea, especially in heavy weather conditions”. Emerald Marine Products agrees that casualty can occur in heavy weather conditions but we have historically seen casualties and near fatalities relating to man-overboard incidents occurring even in calm weather conditions. As reported in the past, man-overboard incidents are caused from many conditions, such as tripping on misplaced objects, dehydration, exhaustion, poor training. Regardless of weather, actions should be taken by companies to assure their employees are protected.

The Safety Alert goes on to state; “The Coast Guard strongly recommends owners and operators of deep draft vessels:

Emerald Marine Products has heard that more Form CG-835V have been issued to companies that don’t fully comply with Management Safety Systems (SMS) or Towing Safety Management Systems (TSMS). In light of this latest Safety Alert, we are sure the US Coast Guard will be actively looking at many companies compliance with SMS or TSMS.

When companies review their SMS or TSMS policies they should seriously look at the ALERT Man-Overboard Alarm System. In the case of the tragedy outlined earlier, the use of the ALERT system would have helped to track the seaman who was swept out to sea. The ALERT Man-Overboard System is recognized as the leading and fastest indicator of a man-overboard situation. Our automatic water activated transmitters report to the wheelhouse or other monitoring station within seconds of a MOB. A visual of a person in the water will assure a quick response and will be integral in the execution of your MOB recovery outlined in your SMS or TSMS. Why not invest in an alerting system that compliments your mandated MOB procedures? The investment is a fraction of your cost to implement a SMS or TSMS and will pay dividends by providing your employees with the confidence that in the event of a man-overboard incident, the crew will be notified within seconds, and tracking in the event that the MOB is lost will help in their quick recovery.

Shane Smith, Founder of C-Hero, a manufacturer of life saving products contacted Emerald Marine Products in 2016 with one goal, increase the chances of saving a life of a tug boat crew member. In 2016, Captain Smith was developing a product that within three years would become a certified type-approval. Specific to International Maritime Organization A520(13) operational readiness requirements for vessels with lower freeboards.

Emerald Marine Products worked closely with C-Hero in the development of their C-Hero Lifting Davit and C-Hero VR-12 Reach poll because our products were so closely aligned and Captain Smith’s knowledge and passion for safety. As Captain Smith expressed when he first contacted Emerald Marine Products, “My product gets a person out of the water, quickly and safely. Your product lets the boat know you have someone in the water in the first place. Before you have a rescue you need to have an alert of a man-overboard.” Captain Smith really understood the impact of a total solution to someone falling in the water. First comes the alert, then the training of a crew so they can spring to a rescue effortlessly and quickly. Finally, the retrieval of the person quickly and safely. “Due to the height and reach of a tugboat, rescue products on the market were not adequate for tugboats”, Captain Smith iterated. Though designed for the tugboats, the C-Hero Lifting Davit works with all other types of vessels such as ferries, push boats and ocean supply vessels (OSV), hence the recently certified type-approval to meet SubchapterM requirements. The USCG (SubM) option boats are required to perform a Man –Overboard (MOB) drill for the USCG at the time of Certificate of Inspection (COI). In 137.215 (4) a surveyor has to examine systems in support of drills and training to ensure that it operates as intended.

Emerald Marine Products is proud to be an adjunct to the SubchapterM requirements and a partner with C-Hero. Together, we provide a total Man-Overboard Alert and Rescue solution with our ALERT Man-Overboard Alarm System, OSCAR – Water Rescue Training Dummy and C-Hero’s Lift Davit and VR-12 Reach Pole. For more information about these products contact Emerald Marine Products via this contact link or call, 800-426-4201.

Recently Kenny Brown, Founder of Maritime Throwdown used OSCAR – Water Rescue Training Dummy to show the differences between a retrieval of a Man-Overboard (MOB) with and without proper retrieval equipment. Thank you Kenny for a well produced video. Every maritime company doing MOB drills should look at OSCAR – Water Rescue Training Dummy as a cost-effective and efficient training dummy. Your employees will appreciate both your concern for their lives and their backs as they carry our lightweight (when empty) and full weight (when filled with water) dummy to provide realistic MOB retrieval exercises.

Thanks to the Schmale Lab at Virginia Tech sharing this video of our OSCAR – Water Rescue Training Dummy being used for their experiments.
Our portable oscar mannequin is primarily used for man overboard training or practicing swift water rescue techniques, but the Schmale Lab gave new meaning to our water rescue dummy as part of a highly intelligent program to monitor tracking agents in water to aid in research on hazardous spills and search and rescue.
We’re proud that our “Marine Man” as part of our overboard products, can be part of research at a nationally recognized research university! 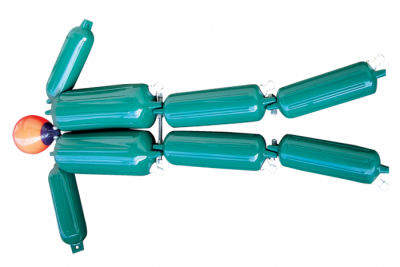 Recovering someone who has fallen into the water is no easy task, especially if the victim is unconscious or lethargic due to cold temperatures. Training is essential to prepare potential rescuers for how difficult it can actually be. The OSCAR Water-Rescue Training Dummy™ from Emerald Marine Products is used by safety instructors across North America for teaching people what it’s like to retrieve a lifeless, 180 lb. adult.

US Code of Federal Regulations 28.270 calls for those in charge of a commercial fishing vessel to conduct monthly safety drills to ensure everyone is familiar with their duties, including recovering someone from the water. Kee provides the 10- and 18-hour USCG-accepted drill conductor training to those who will oversee the monthly training sessions.

Atlantic Beach Rescue department chief Jonathan Kohan agrees. “From a command and control perspective, you want to train like you operate. It’s hard to put rescuers in real time situations when they haven’t trained in critical mass. It’s very different than lifting a straw or Styrofoam dummy.”

OSCAR is a set of rugged vinyl bladders that when filled with fresh or seawater, realistically mimic the size, weight and jointed handling characteristics of a 6′, 180 lb. adult. Fitted with a PFD or immersion suit, it imitates a lifeless MOB victim in every way. After use, it is drained and weighs a mere 35 lbs. It can even be disassembled for easy transport. A video is at bit.ly/2h3AVEY.